This part of the journey really felt like a summer holiday, not so much a road trip. We started our day with a breakfast on the waterfront veranda of the CBK Craft Beer and Kitchen.

This was our view. Amazing, isn’t it? 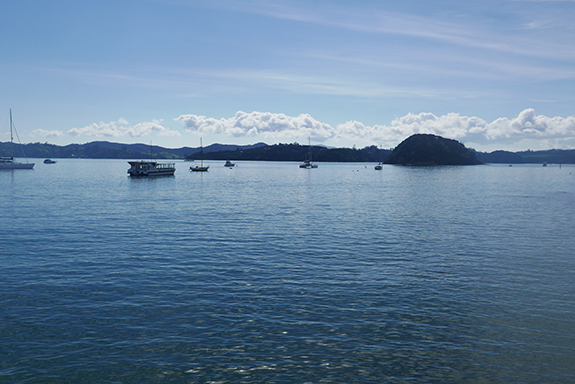 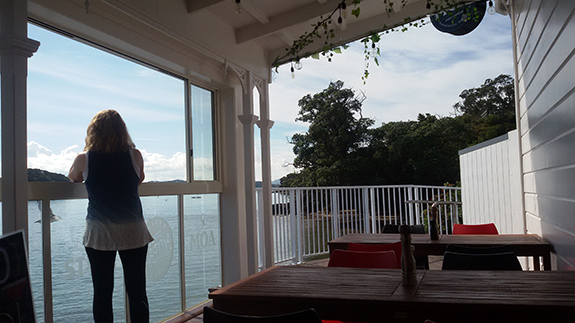 Like I said before, this was the place where I fell in love with the New Zealand Christmas Tree. In this photo I’m capturing a motif that I knew I wanted to paint – I’m going to show you the result in the next blog post. 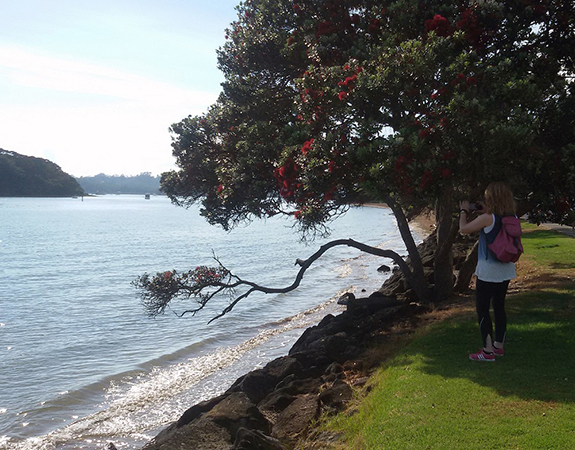 We took the passenger ferry, the „Blue Ferry“, from Paihia to Russell.

I must confess that I did not feel so well during the next few hours. For some reason I had a lot of problems with dizziness and nausea. So I didn’t take many photos. And some of the photos I did take have very strange optical effects where I don’t know what I did… Obviously I wasn’t at 100%… 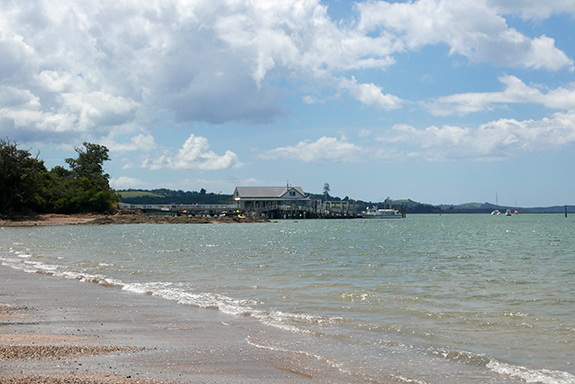 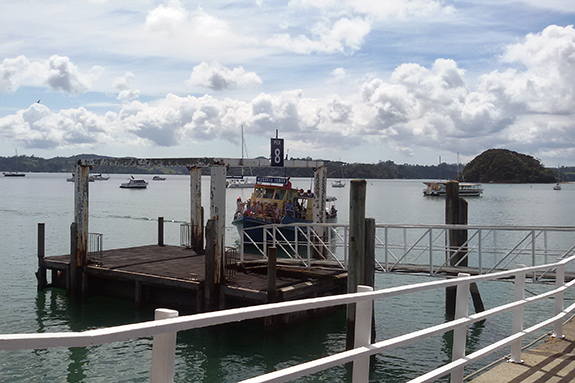 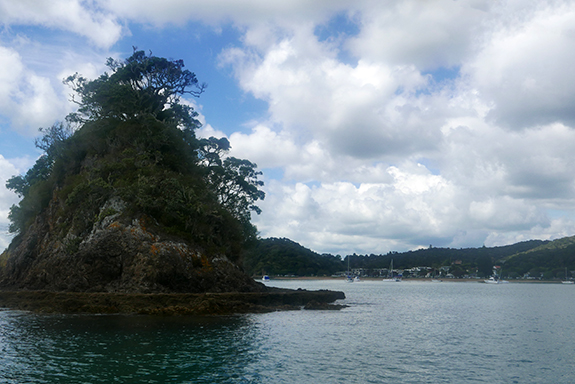 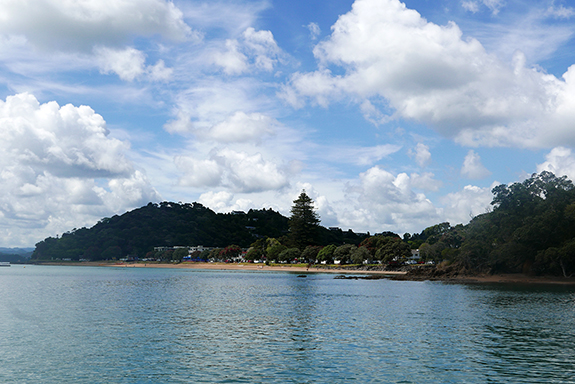 It is always said that Russell was New Zealand’s first capital (for a very short time), but strictly speaking this only applies to a very specific part (Okiato, „Old Russell“) of the peninsula on which Russell is located – and a part we have not been to. 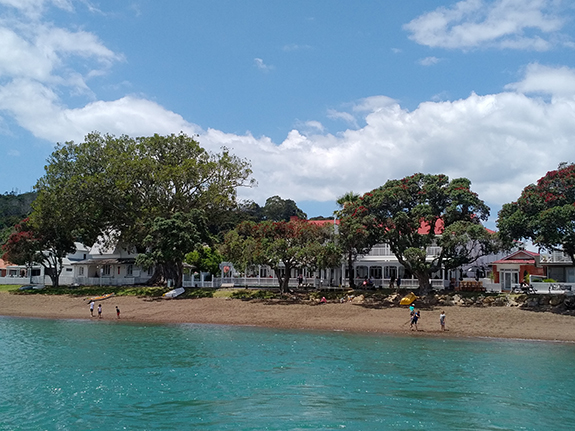 Nevertheless, we were in a truly old part of the country – at least as far as it concerns European settlements; this was the first. 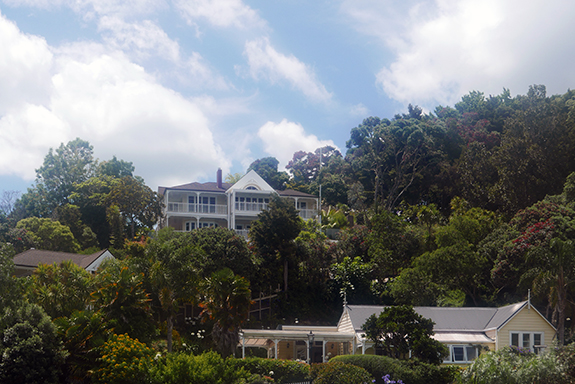 In the early 19th century, Kororāreka, as it was then known, seems to have been a rather disreputable town, populated by whalers, adventurers, deserters and sinners of all kinds – and missionaries who translated religious texts into Maori. 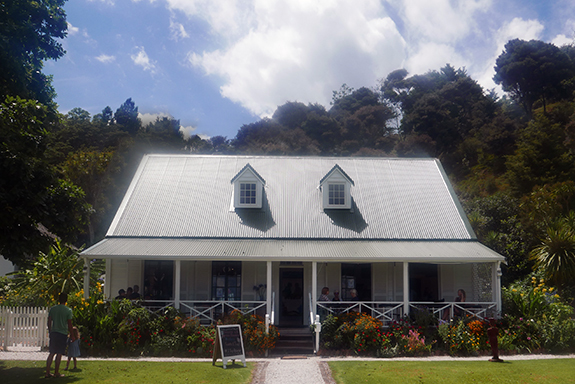 This is Pompallier Mission, the only surviving pioneer printery and tannery in New Zealand. Here the translated texts were bound into books.
You can book heritage tours and explore this outpost and its colourful heritage gardens. There’s a pretty shop and they advertise „Coffee, Croissant & Culture. Experience a rich story, a dark roast & a lasting memory“. 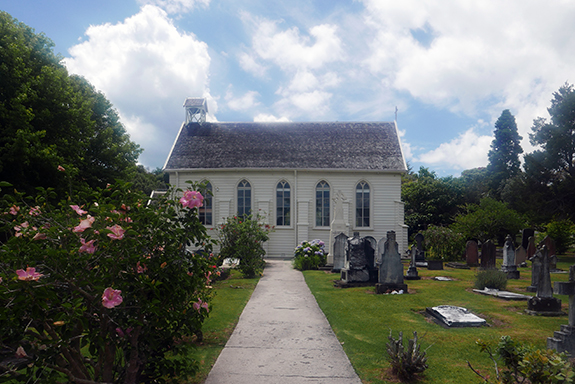 Christ Church. New Zealand’s oldest working church, built in 1835. The churchyard contains graves of the Maori chief Tamati Waka Nene and of men who died in a battle between British forces and Maori. 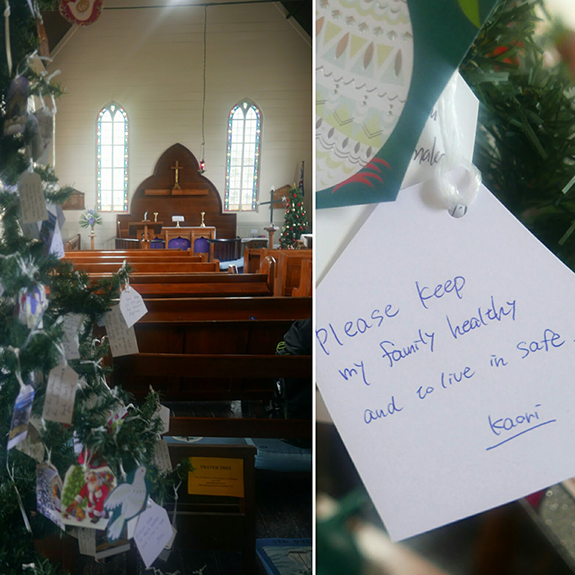 Inside we found a Christmas tree decorated with paper tags on which were written people’s wishes for Christmas. 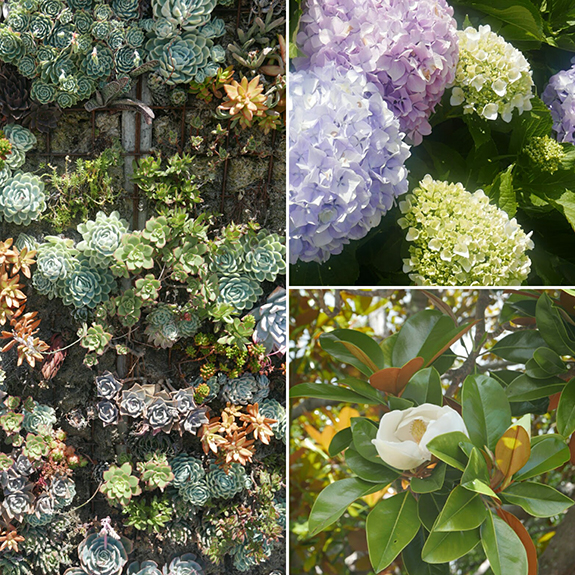 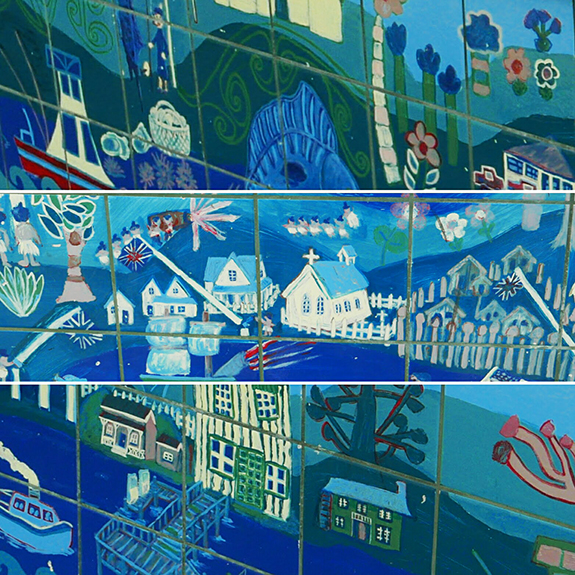 Russell offers lots of shops and local art. And lots of restaurants.
We had drinks at the Duke of Marlborough Hotel, which is the oldest hotel in New Zealand – although it was then known as „Johnny Johnstone’s Grog Shop“ – which I think is hilarious! Their brochure says that they have been „refreshing rascals and reprobates since 1827“.
Today the Duke is rather elegant, and we enjoyed the waterfront view. 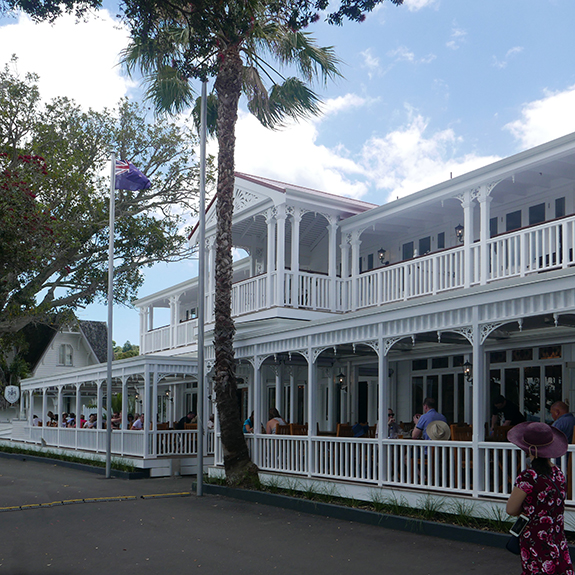 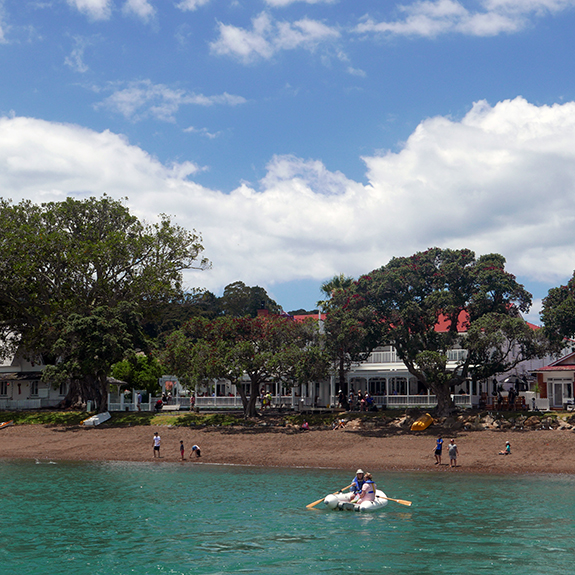 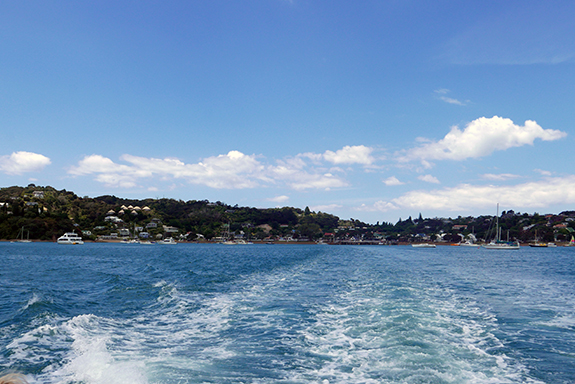 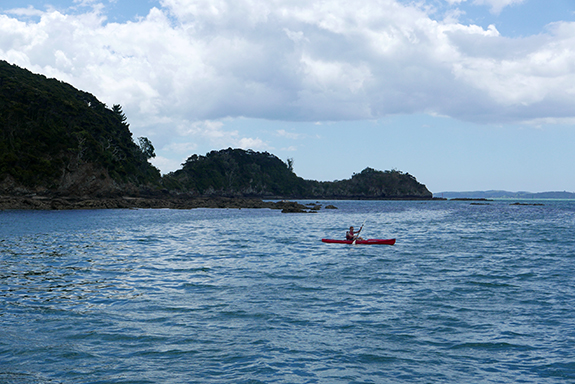 After the ferry ride back to Paihia, my sister went for a swim and I grabbed my sketchbook and watercolours and captured my impressions. 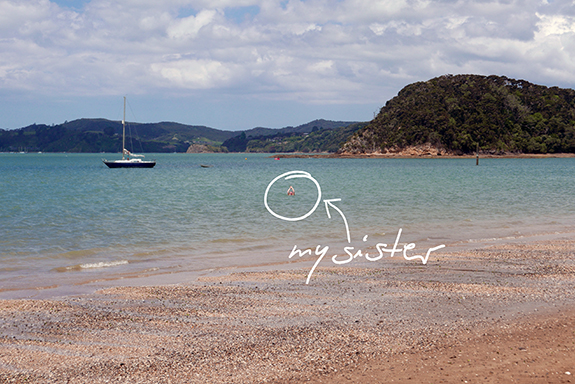 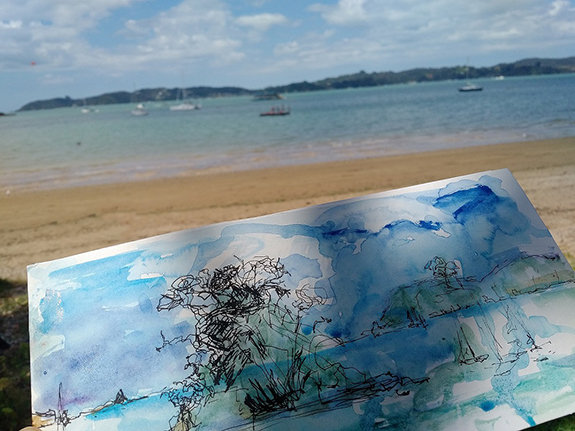 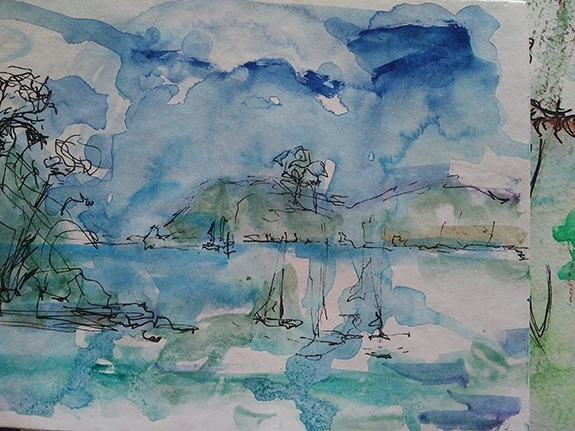 We had coffee and cake in a tiny ice-cream parlour. And afterwards the heavens opened and there was a heavy downpour and a thunderstorm. 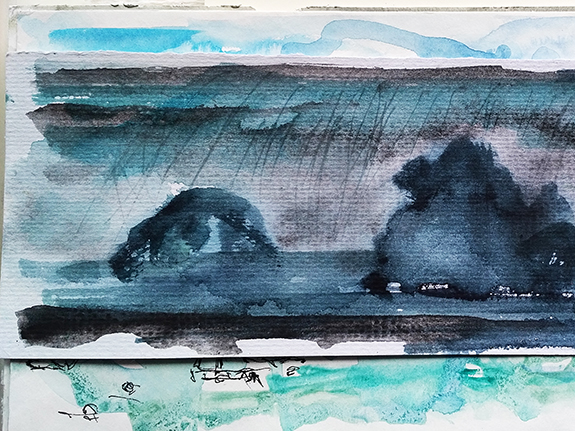 It wasn’t until eight o’clock in the evening that we could go outside again, and we had our dinner at the familiar CBK. (We realised in the first few days that it’s not as easy as you’d think to eat out as a vegetarian in New Zealand. We often ate Asian food). 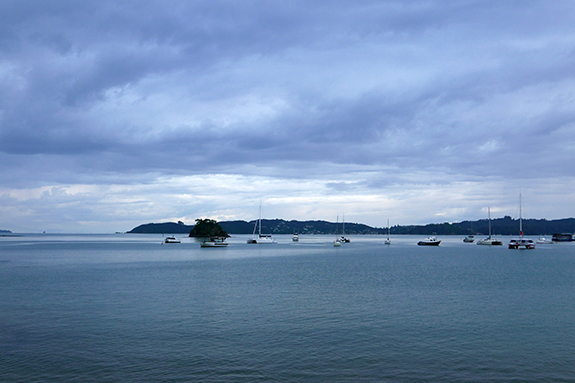 In Paihia, I spent a lot of time looking out at the ocean. And the Pacific Ocean has been a lasting inspiration to me. 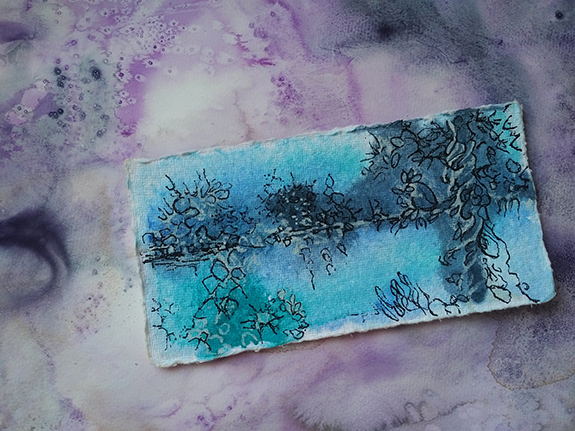 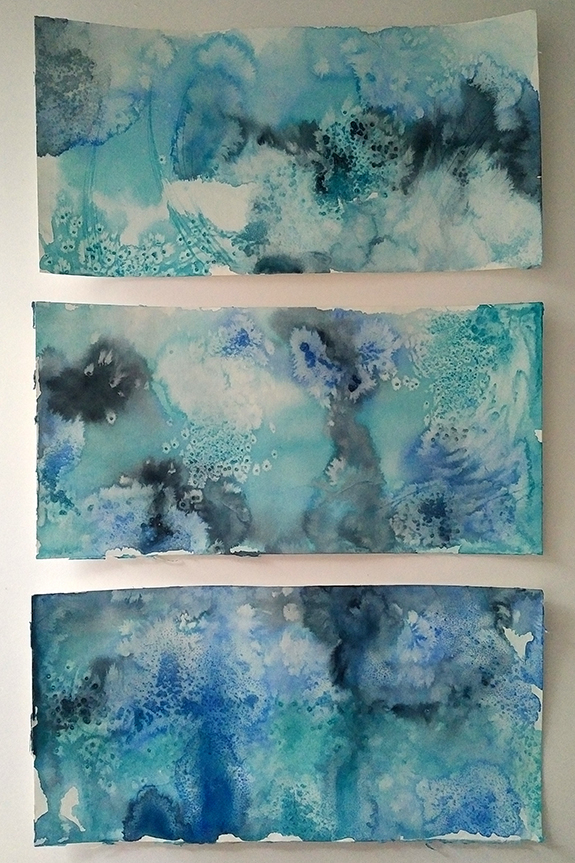 I painted many, many abstract watercolours to express my „pacific inspiration“. This is just a fraction.

For my series of pastel paintings, I later decided on the evening atmosphere over the Bay of Islands. At the moment, the painting is here in my office and I can look at it while writing these words. 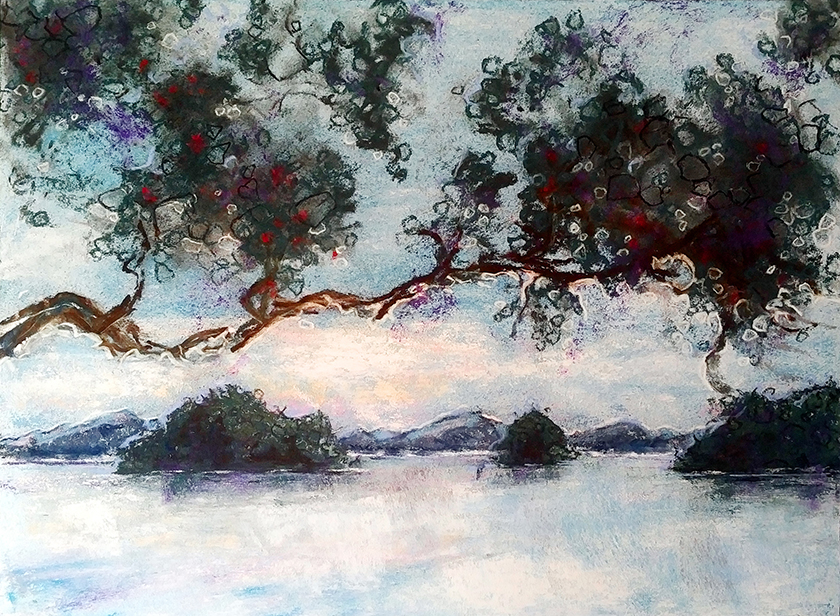 Half a year had passed when I finished this painting. It was summer here – and what a summer! I remember that sometimes I only went shopping at dusk because it was so hot during the day. Still, I think I needed the summer feeling to get the New Zealand paintings off on the right track. Immediately after our return, I kept ’stumbling‘ over the climate differences between my surroundings and my memories. 🌞❄
„Bay of Islands No.1“ (yes, I think there are more to come) represents the holiday feeling of our trip for me. It reminds me of relaxing and unwinding after working literally until the last minute before we left.

There is a blog post about the creation of this painting. If you’d like to get a glimpse of my painting process, click here for the ‚Making of‘.

Three days full of colour and light... Here are a

🎨↔🌿 This is the month when I constantly ha

There are countries where doctors prescribe people

I still find it difficult to paint / sketch while

We artists do not work in a vacuum. And I find tha

“When I dare to be powerful, to use my strength

Christchurch broke my heart. So it's no wonder I'm

Another experiment with oil pastels instead of cha