On this day, the visit to Fox Glacier was the main item on the agenda. But before we left Hokitika, we finally got to see a kiwi!

We visited the National Kiwi Centre and watched not only the feeding of the kiwi, but the feeding of the world’s biggest freshwater eels – which are 100 years old and very impressive.
The kiwi was quite active, however the room was very dark and photography not allowed – included in the price, however, was a large photo of the kiwi we observed. 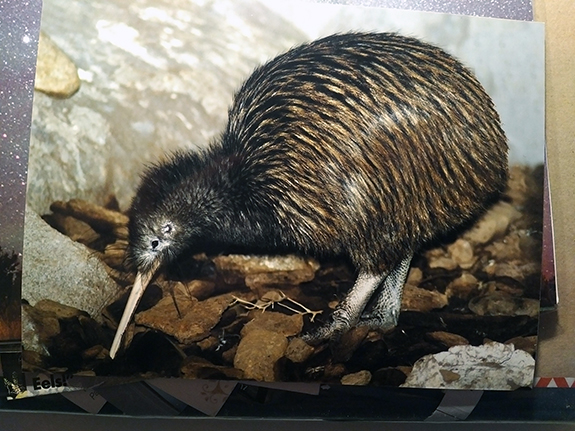 Afterwards we drove to ‚Glacier Country‘. Strictly speaking, we chose Fox Glacier because of the accommodation. Since we hadn’t booked everything from Germany, we sometimes just had to take what was still available. 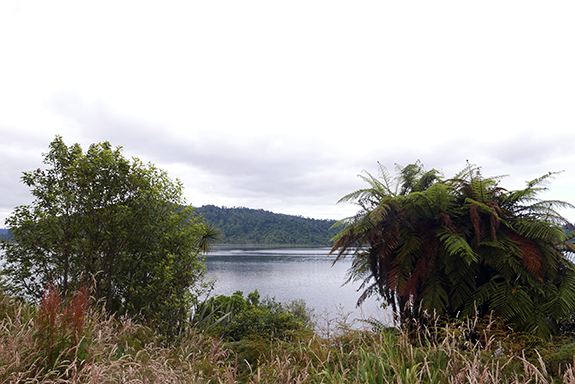 On the way there we passed a couple of very beautiful lakes and a few dried up rivers. One of the lakes was Lake Ianthe. 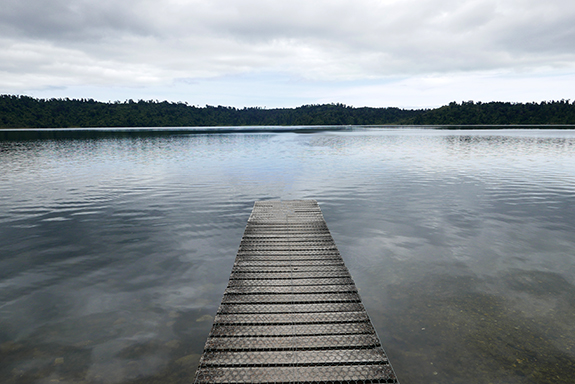 The water surface of Lake Ianthe was incredibly fascinating. I hope you can see a bit of that in the photos. 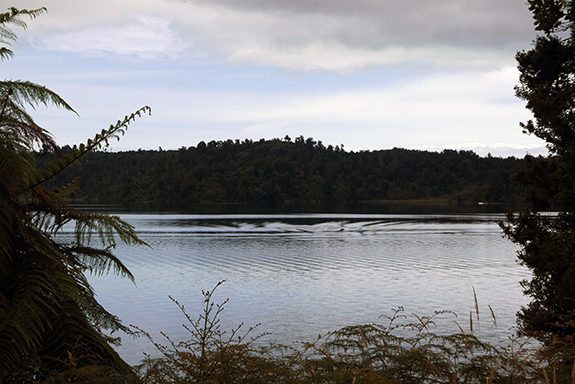 I’ll admit that I was amused by the way the fishing instructions and information was presented:

Lake Ianthe. Warning: There is a population of noxious Rudd in this lake. The methods used for Rudd fishing are illegal in the West Coast Region. Any Rudd caught whilst fishing for Trout and Salmon must be killed and returned to the lake. It is illegal to possess Rudd.
Daily Bag Limit: 2 Brown Trout. 2 Quinnat Salmon.
Authorised Tackle: All legal fishing methods as defined in the South Island regulation guide. 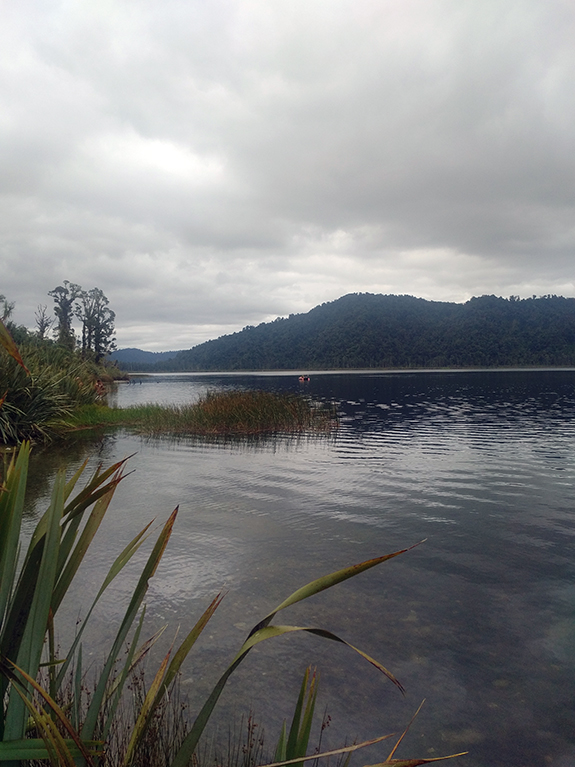 We checked into the hotel (no, I’m not naming the hotel because it wasn’t very good and way too expensive) and then drove to the access point for the glacier. 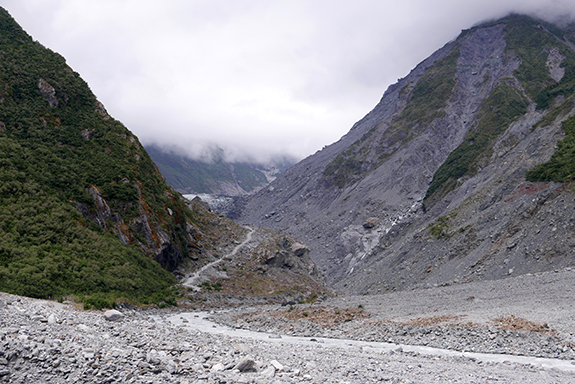 The walk from the car park to the lookout point, to which you are allowed to walk, regularly takes 30 minutes. Since we took so many photos again, we walked for a total of 1 1/2 hours. But with such great views, you have to take your time! 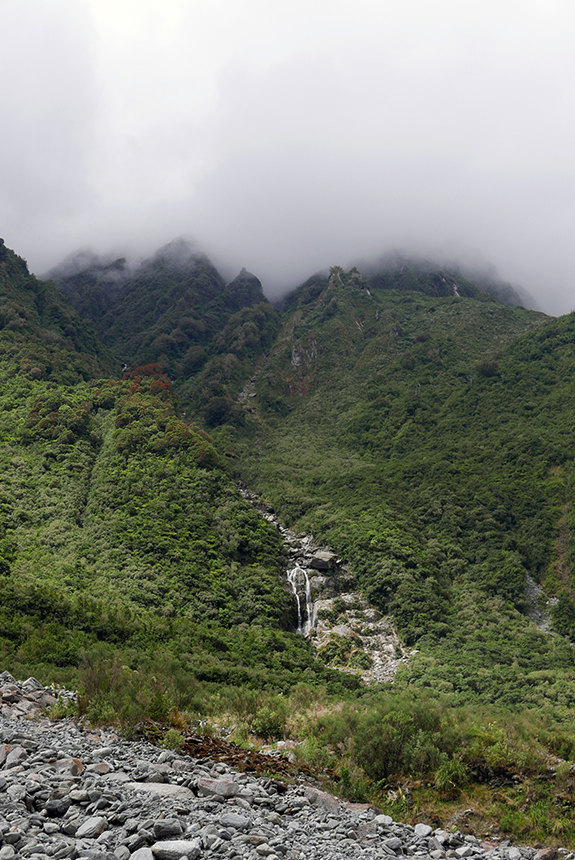 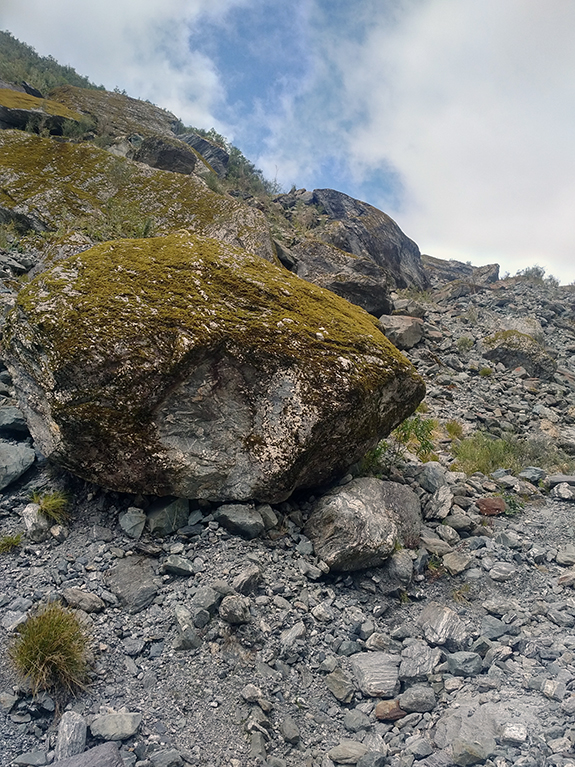 In the language of the Maori Fox Glacier is known as Te Moeka o Tuawe (Tuawe’s bed). 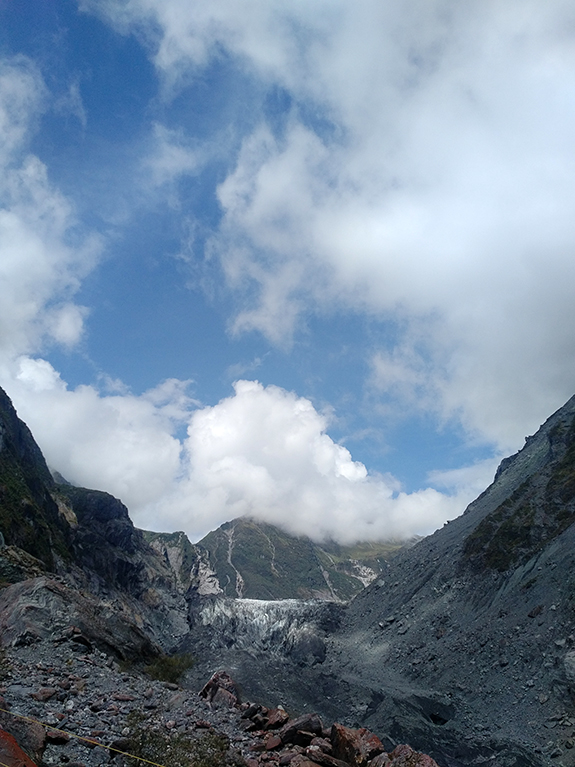 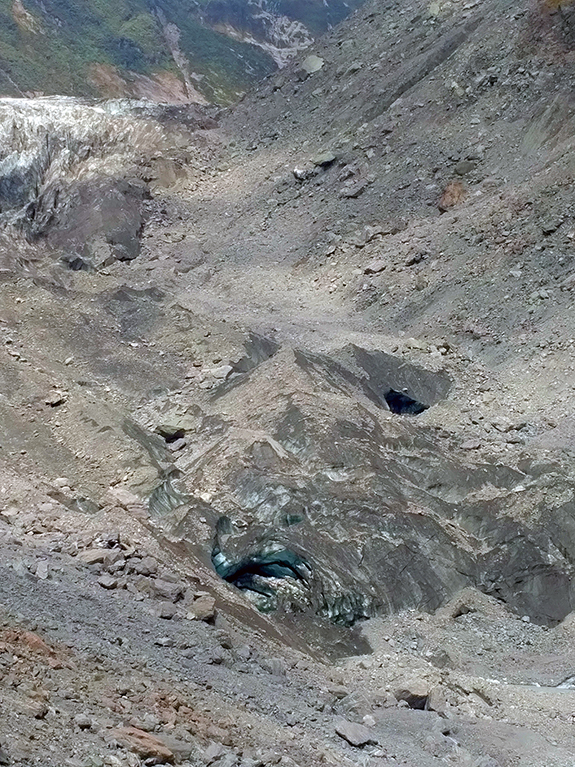 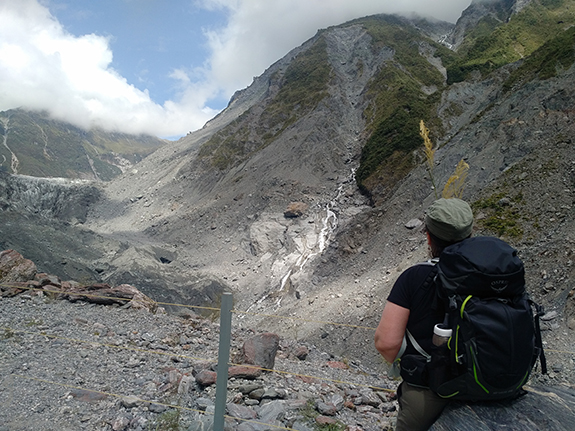 My sister at the place up to which one was allowed to go. 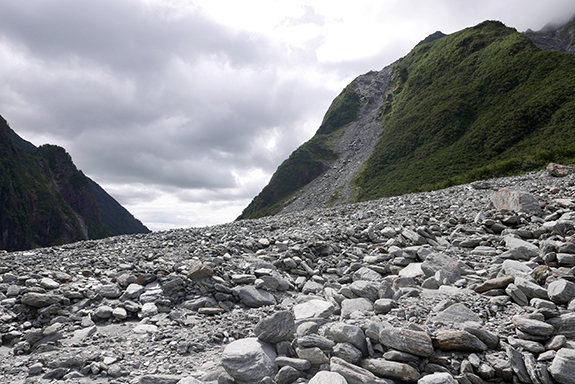 The following painting has become a kind of title image for my whole ‚New Zealand Art Experience‘ – it is on the cover of my art book „New Zealand Memories – a Painterly Journey Through Aotearoa, the Land of the Long White Cloud“ for example, and we used it for our open house invitation. 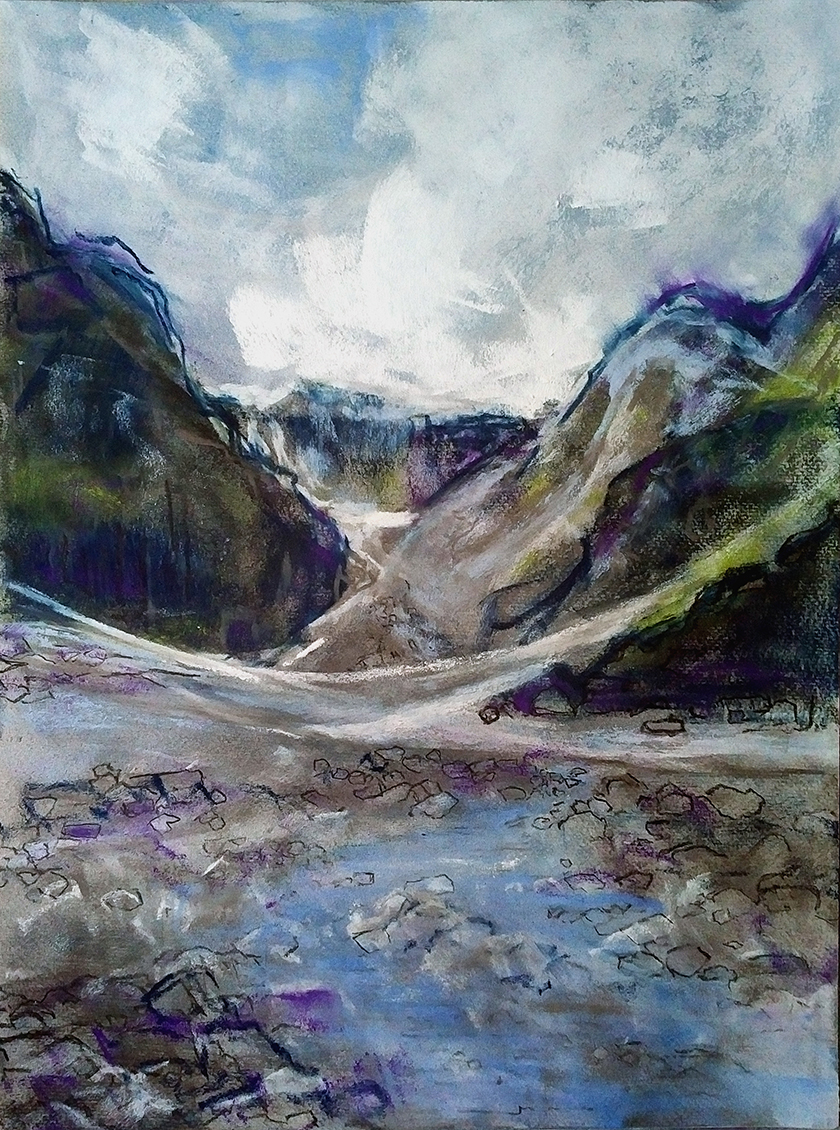 The story of this painting is interesting, because I didn’t expect to be so inspired by the Fox Glacier experience. At times I felt a bit underwhelmed actually. The atmosphere was strange. As you can see in the photos, the glacier looked kind of ugly and dirty depending on where you stood – But then there were moments when suddenly the perspective was just right, or the light became very dramatic, and these moments have impressed me so much apparently that when I painted this scene I was completely ‘in the flow’. I don’t even remember much of it… It’s one of those pieces that seemingly painted itself. (If you are interested, there is a Making-of about this painting).
I hope to finish one other painting about Fox Glacier soon, showing the opposite view we had on the way back. 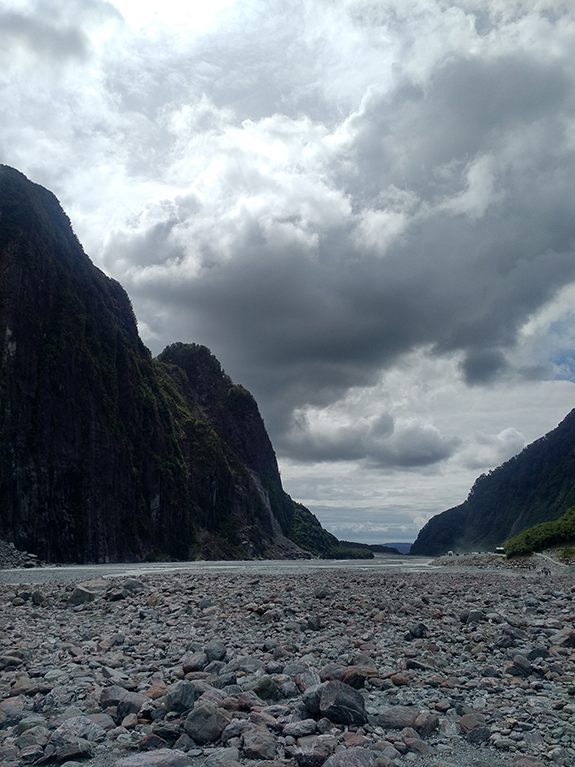 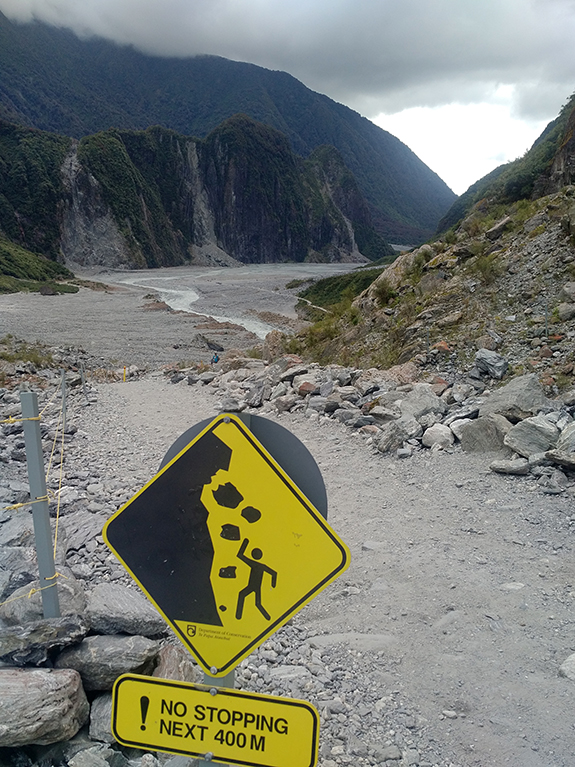 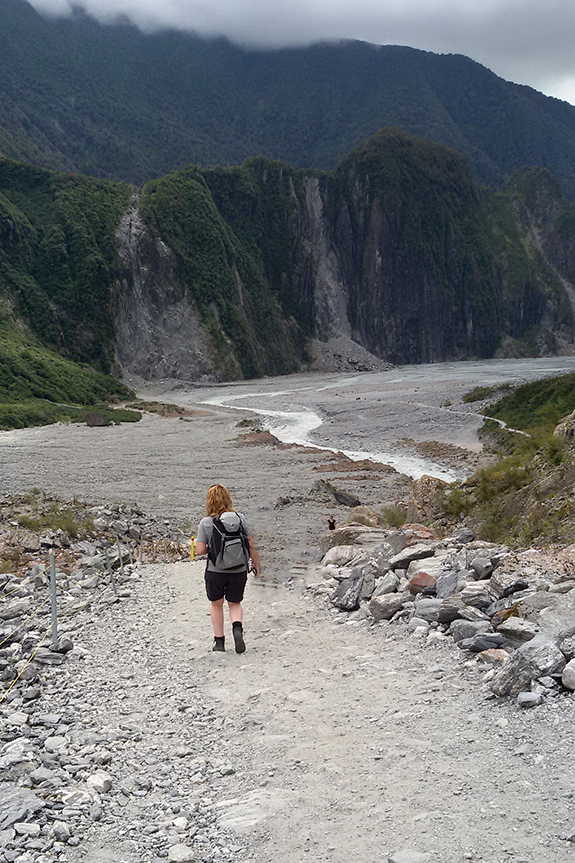 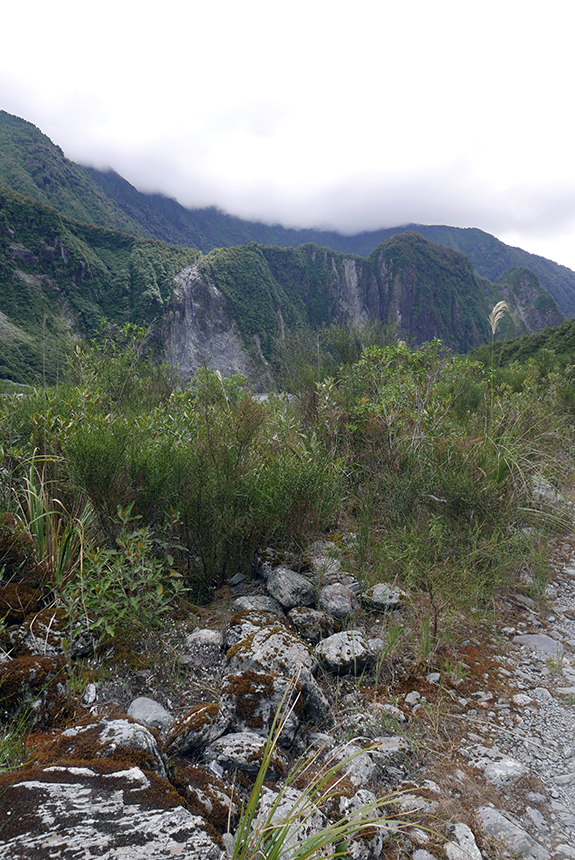 Fox Glacier ends among rainforest – Fox and its neighbour Franz Josef both penetrate temperate rainforest, which is an absolute rarity – and although there was a significant retreat in the last 100 years, there has also been a phase of advancing until 2009. 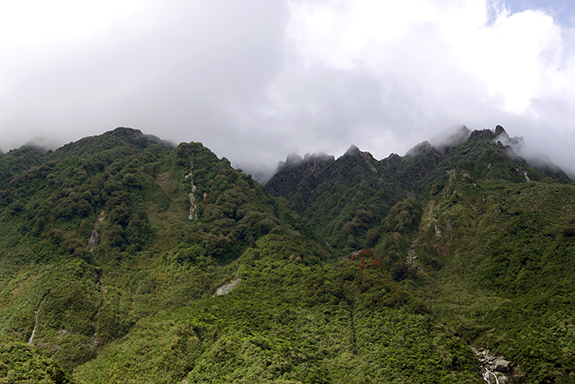 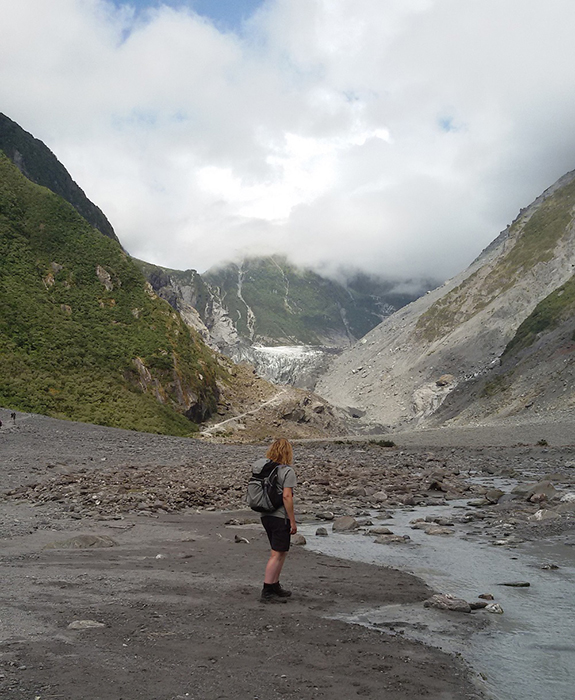 On the way back to the car we passed an old suspension bridge, which I dared to cross this time – I wanted to practise for the Blue Pools and Hooker Valley. 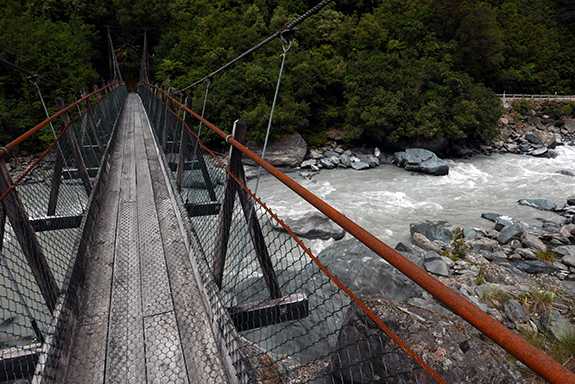 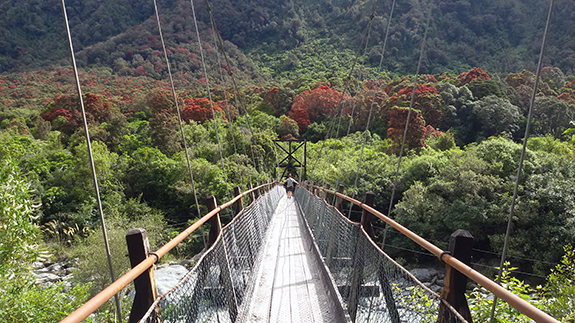 We had dinner at Café Nevé (nevé = snowfield at the glacier head). The people there were super nice and helpful and the food was very tasty! (I’m afraid they don’t have a website I could link to) 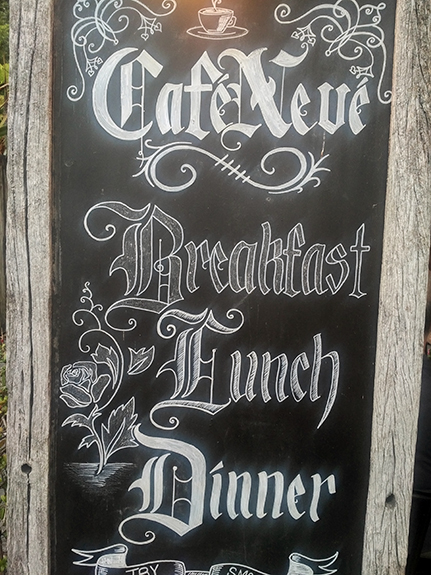