St Paul’s and the Wobbly Bridge 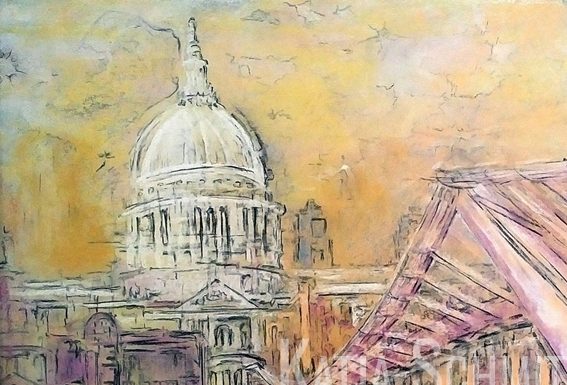 This is a painting that sort of embodies my personal story over the last six years, 2011-2017, (and for those of you who know me a little more closely, it’s no miracle that this painting is about London).

I have added layers upon layers – and even more layers – during the past six years. There were long periods of time when I thought I was finished, then there were months when I knew I wasn’t, but didn’t know how to proceed.

This spring (2017) I finally found the colours that reflect the memories and feelings connected to this place, this city.

I began the painting six years ago when I was in a rather darker place, and previous incarnations of this painting reflected that.
At the end of 2010 I started to have some serious health issues, and the first time I crossed the Millennium Bridge (early in 2011, a weekend in London with my sister-in-law), I had so much trouble with balance and vertigo that I barely made it to the other side – It always makes me smile to hear it called „wobbly“ bridge, because that seems so fitting to me 🙂
I had not visited London for many years, and I was so excited – and so afraid I wouldn’t be strong enough – that I managed to get a panic attack at Tate Britain while walking into the Turner wing of the museum… So you can imagine that even though we had the best weather during this visit, when I painted the first version of this piece, there was a lot of grey creeping into it.

I kept some of the grey, because it reminds me of all the dust I struggled with when I visited London a year later. It is still visible underneath the brighter, warmer layers – and yes, it reflects my own struggles, too.
That year I had managed to deal with my fear well enough to tour a bit of the south / south-west of England on my own, even though I didn’t always feel well physically. I started and finished my journey in London (June 2012, accidentally directly before and after the Diamond Jubilee festivities). When I came back, I knew that I had to change this painting, but I didn’t know *how*.

In 2013 I didn’t visit London. Instead I had a thyroidectomy. They discovered a very small malignant carcinoma, very low risk, but this diagnosis pulled the rug out from under my feet, and it has influenced my life ever since. But not only for the worse! Among many other things, I bought a house for example 🙂 And most importantly I have made art a priority again.

A new beginning. So I painted a thick layer of white over everything. 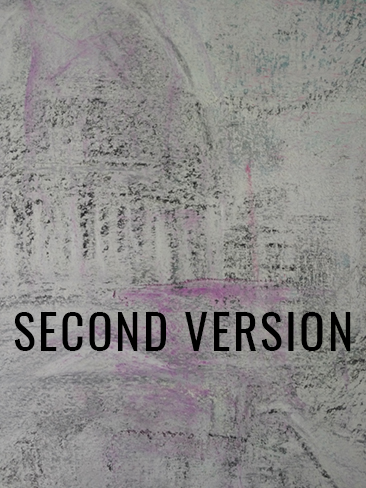 When you rearrange your life and priorities to such an extent, when you have to deal with your fears, with health issues, work on self-analysis, self-development, try to figure out your business etc., it feels like a giant work of de- and re-construction of yourself at first. And it is so fascinating to see all this reflected in the stages of this one painting!

Since 2014 I visited London annually either with family or with some of my best friends, and what I learned was that as important as all this mental work was and still is, it tends to be ‚cold‘.

It took a while for my painting process to leave this ‚headspace‘ and move further down to where my heart and my stomach are 😉 And the next time I felt bold, I painted a thick layer of dark, warm yellow over everything and then added the complementary colour to make it shine even brighter.

I love London so much. It is one of the most amazing places, and I have so many wonderful memories connected to this city. London is inextricably linked with my personal story, both the hard and the good stuff – and I have crossed this bridge many, many times since 2011!

This painting is not perfect. It is gritty. It is flawed. The architecture is ‚wobbly‘. You can still see the struggle.

But you can also see the joy! There’s warmth and light. And it is actually quite captivating.

When you stand before the painting now, it radiates!

If you are thinking about bringing home some London art, there are a few original paintings available in my gallery.